Making Sense of Magnified Optics on a Tactical Carbine Part 1

Making Sense of Magnified Optics on a Tactical Carbine

Magnification can provide an advantage in competition or be a force-multiplier in the tactical world. For a fighting carbine, two good options are the low-power variable optic (LPVO), and a red dot sight (RDS) with flip-up magnifier – but before you just throw glass on your carbine, there’s a few things you should know. 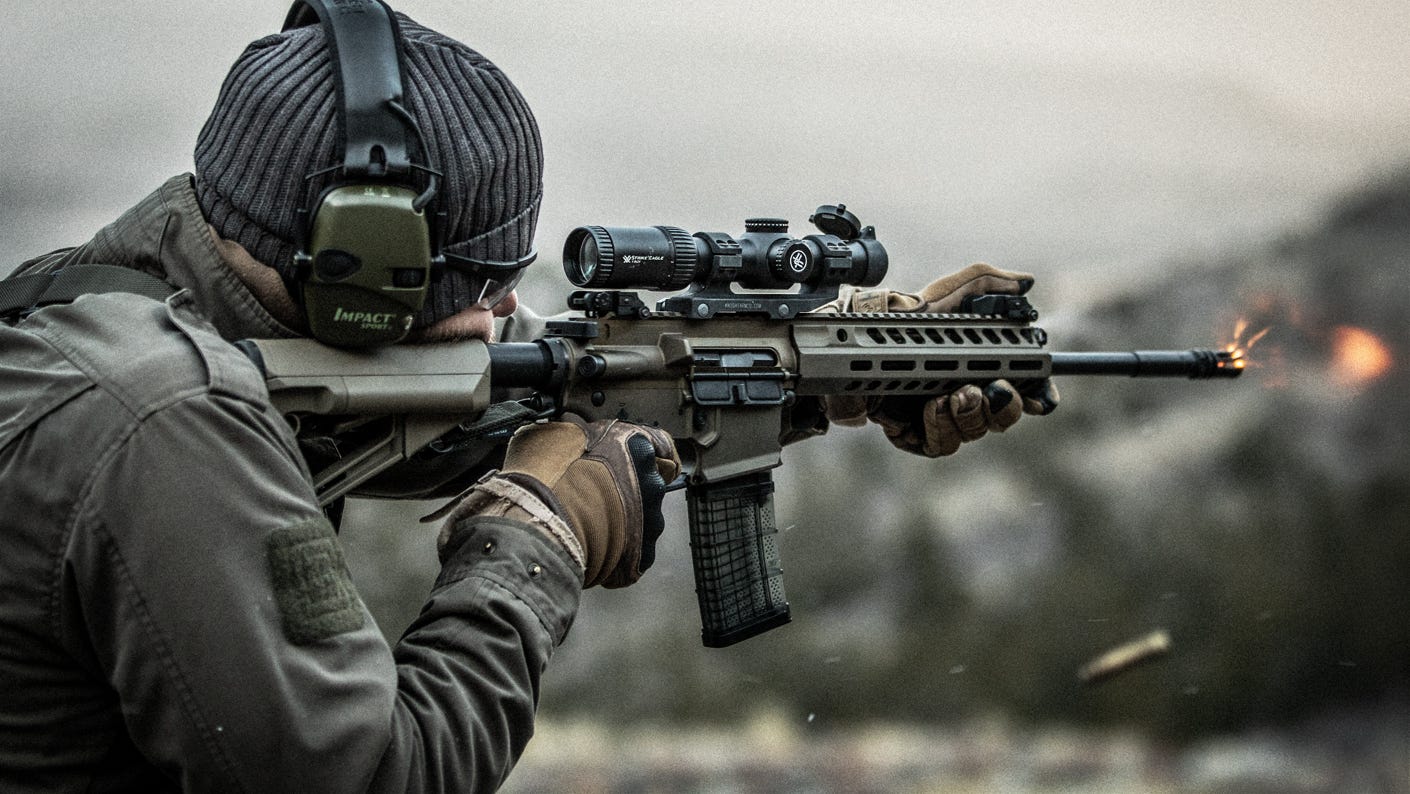 A critical concept to understand is that magnification will not help you shoot better – it will help you see better. An optic provides a shooter with information – most importantly, where your sights are in relation to your target. As a shooter, you want enough information to provide a reliable sight picture, but too much information can be distracting and contribute to mental mistakes. Over-magnifying your target will result in a smaller field of view and make sight-wobble more noticable - which can contribute to a shooter attempting to time their shots and “flinching” when trying to make a precise shot from an unstable position.

In the tactical world, magnification is most useful for positively identifying targets, and determining whether a target poses a threat. This can lead to a faster reaction time when engaging threats, reducing the danger to one’s self or team. Conversely, magnification may help an individual determine an object held by a subject is actually not a weapon or help them to positively identify a person based on facial features, as well as gather additional intelligence about a structure or individuals from a greater distance.

In the law enforcement world, a magnified optic may allow officers to set up on a problem from a longer distance, providing greater reaction time and potentially opening the door to more intervention options short of deadly force, again, which could avoid the need for a deadly-force response altogether.

In the world of CQB, the man with 1x capability is king

The vast majority of all law enforcement and private-citizen self-defense shootings occur in close quarters, within 15 yards. While military operations can vary greatly, in urban terrain where units are clearing houses, the importance of having an optic capable for true 1x magnification is paramount.

Shooters should pay a great deal of attention to the capability of their optics on the low end of the spectrum. Things like eye relief, eye box, scope profile, and illumination are critical in determining how the optic will perform when engaging targets at close range. The best low-power variable optics (LPVOs) on the market today will allow shooters to utilize them in the same manner they would as a red dot, shooting with both eyes open, and providing nearly identical first shot times, shot splits and target transition times as a red dot sight (RDS). Because of this, LPVOs like the Razor 1-6 have become extremely popular in the special operations community and even on SWAT entry teams because of their excellent capabilities on 1x.

LPVOs are the jack of all trade optics. The best ones can do 95% of what a red dot can do, and then a whole bunch more. LPVOs used on a tactical carbine should be durable, and as discussed above, excellent performers at 1x magnification. For tactical work, the LPVO should be stored or carried on 1x power. This allows the shooter to react the fastest to immediate threats, especially those in close range, and makes locating a target far easier than attempting to pick one up when the optic is set on high magnification. A target at longer range where magnification would be useful to the shooter generally allows additional time for the shooter to crank that magnification ring up as needed.

Meet in the Middle

A huge advantage of an LPVO is the ability to select from a broad range of magnification settings. Experienced shooters will often utilize their LPVOs in the middle range of magnification, depending on distance, target size, and situation. When engaging targets from 50-150 yards, I will often adjust my magnification somewhere in the 1.5-4x range. This helps me obtain a more refined sight picture on the longer targets without sacrificing field of view, speed to acquire target, or noticing an increased degree of sight “wobble” when shooting from an unstable or unsupported position.

These middle magnification settings can also provide a tactical shooter with a good option when faced with a fleeting or reduced target at say 30-75 yards – for instance where a suspect is popping their head around a corner sporadically, or when a precision shot is required – such as in a hostage situation.

For use on a tactical carbine, a second-focal-plane LPVO will meet the needs of 99% of shooters. When running a 50 or 100 yard zero (which you should be), hits on a torso-sized target can be made out to 250 or so yards without any type of hold. Beyond 300 yards, where utilizing the reticle to compensate for bullet drop, shooters will have additional time to adjust magnification settings, and will likely benefit from turning the scope up to its highest magnification where the reticle will be properly calibrated. Additionally, a SFP LPVO will provide a more consistent sight picture, again aiding in performance on 1x at CQB distances.

First-focal plane scopes start to offer an advantage when a shooter is likely going to be faced with a situation where they have to quickly engage multiple targets at varying distances (I.e. 200 yards followed by 600 yards, followed by 800 yards), and will be doing so using holdovers.

Drawbacks to the LPVO

While the LPVO performs so well in a broad range of situations, there are some things one should consider in their setup and deployment. Because of the engineering and additional parts that go into an LPVO, they are generally much more expensive and heavier than an RDS / magnifier combination. While an LPVO can be built to be very durable, because of their optical design, they are precision instruments, and thus may not handle impacts and abuse as well as a RDS. LPVOs also require the use of high-quality scope rings and must be mounted using proper procedures and torque specs.

A high-quality LPVO will have a generous eye box but will still require the shooter’s eye to be generally behind the optic. This can make non-traditional shooting positions where a standard cheek-weld cannot be obtained a bit more difficult – however, a shooter can overcome this by ensuring consistent scope shadow is visible around the dot.

In the next blog, we’ll discuss red dot sights and flip up magnifiers.

Adrian Alan is Director of Vortex Range & Range Operations at Vortex Optics, in Barneveld, WI. A 14-year law enforcement veteran and firearms instructor, Adrian served as SWAT officer, police sniper, and police sniper instructor among a variety of other tasks.