Late Season Squirrel, and How to Cook Them

By Kody Van Pelt
No comments

Late Season Squirrel, and How to Cook Them

January and February are considered late season for squirrel, and it is arguably the best time to chase them. With the trees bare of leaves squirrels are a little easier to spot up in the canopy allowing anyone with a .22 or shotgun an opportunity to pull the trigger. There are two primary ways to target squirrel: With dogs and still hunting.

Slipping around quietly in the mornings and evenings, trying to spot squirrels while they’re on the ground foraging for food or cutting small branches from the canopy, is extremely rewarding to those willing to take their time. Anyone who has sat in a deer stand for any amount of time knows that squirrels have a hard time being quiet. They are either bouncing around in the leaves sounding like a herd of cattle, sawing on branches, or barking at something (most likely you.) 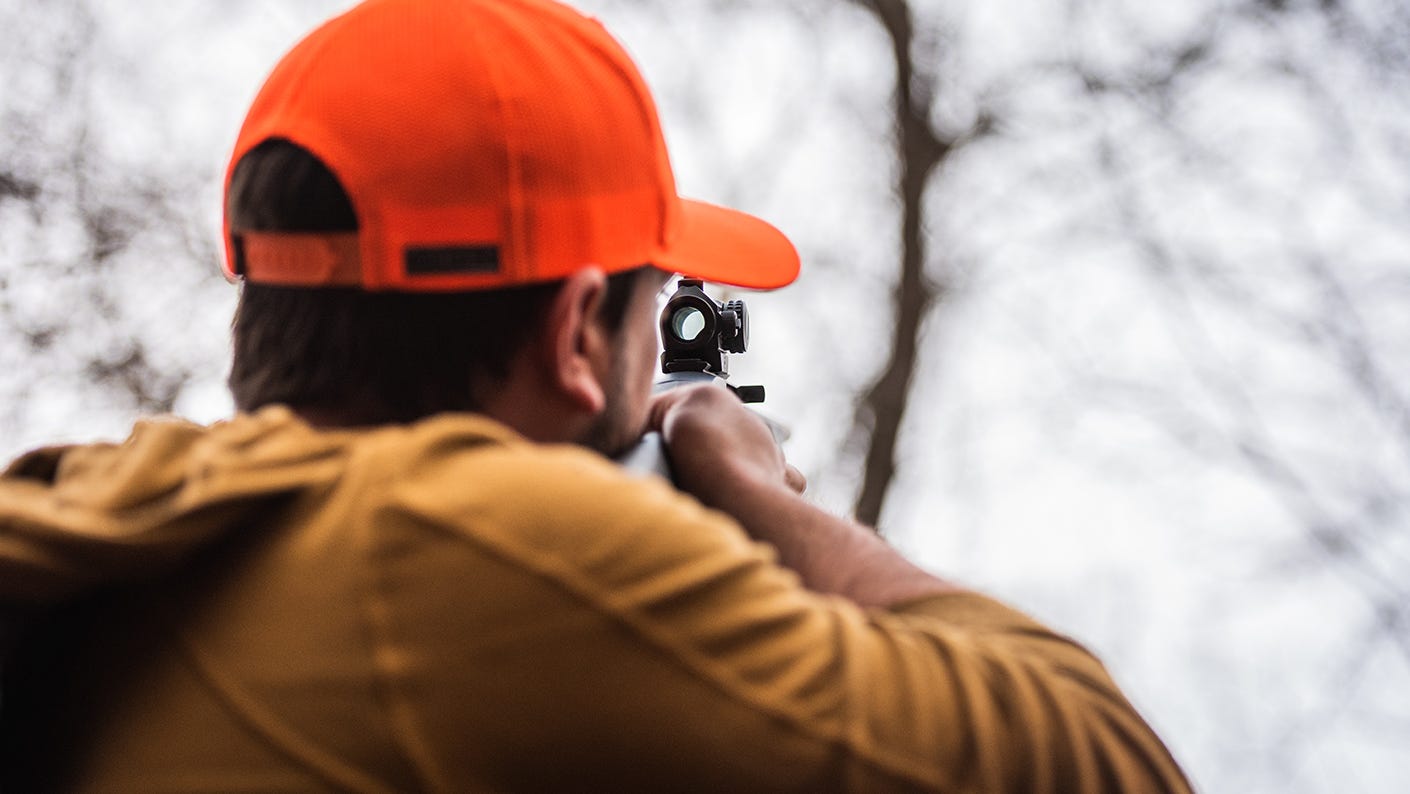 Squirrels are always curious and often on the move, and the noise they make can be a dead giveaway.


But to the still hunter, the active nature of a squirrel is its weakness. As we slip through the woods or sit still in an oak thicket we focus on those sounds. Once we’ve locked on to that sound, we slip through the woods until we have spotted the squirrel. Most of the time there is more than one. An unsuspecting squirrel can easily be picked off from a distance by a .22 and a clean line of sight, but once that squirrel spots you it’s a different ballgame.

I got my first taste of hunting with squirrel dogs recently, and talk about a good time. There were two rules the handlers had for us: “Don’t shoot a squirrel on the ground" (for safety of everyone) and “Don’t shoot a squirrel that the dogs haven’t treed.” That meant we were on cruise control until we heard baying. There was no need to stay quiet, or slip around stealthily with two 20 pound dogs zooming around everywhere stirring the woods up. 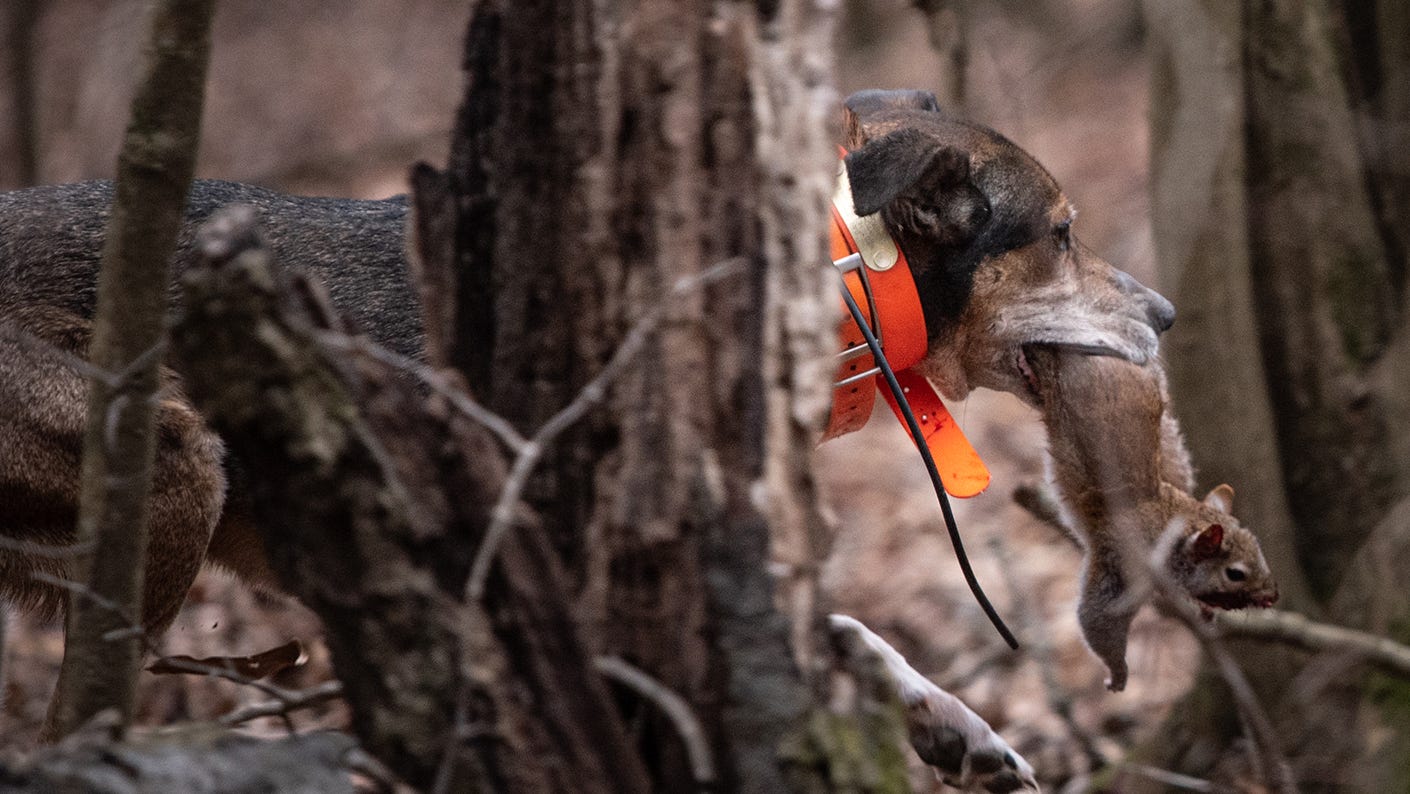 Good squirrel dogs scent and locate squirrels and put them up trees, often giving you a good shot at knocking the bushy tail down.


Once we heard a bay it was game on. Everyone hustled to the tree the dog was barking up and from there it was the exact same as still hunting. Most “trees” yielded at least one squirrel and for the handful of trees that didn’t, a simple “in a hole!” sent the dogs off into the woods looking for another. After a casual couple of hours, we had 15 squirrels.

Typically, when we hunt squirrels, there are three of us. One carries a shotgun for the greys that won’t sit still, one carries a T-bolt .22 with a 3x9 scope, and I carry my .22, a Ruger 10/22 with a Crossfire® red dot. This loadout allows us to counter about any play a squirrel might have, short of denning up.

I have my red-dot sighted in at 35 yards and it is a mid-range squirrel punisher. Having no zoom allows me to find my target faster, and to keep my eyes on quick moving squirrels as they speed up and down trees. As soon as they pause for a second, I’m already on them for the shot.

Shooting a semi-auto allows me a couple chances at narrow margin shots and helps flush squirrels from a good hiding spot. If they make it to the top of a tree or bunker down on top a big limb, we have no trouble bracing up and knocking them out using the 3x scope in the T-bolt.

Fox squirrels tend to bunker down on-tree, keeping the tree’s trunk or a big limb between you and them. They press their bodies near flat and quickly rotate around the tree to stay opposite of you. 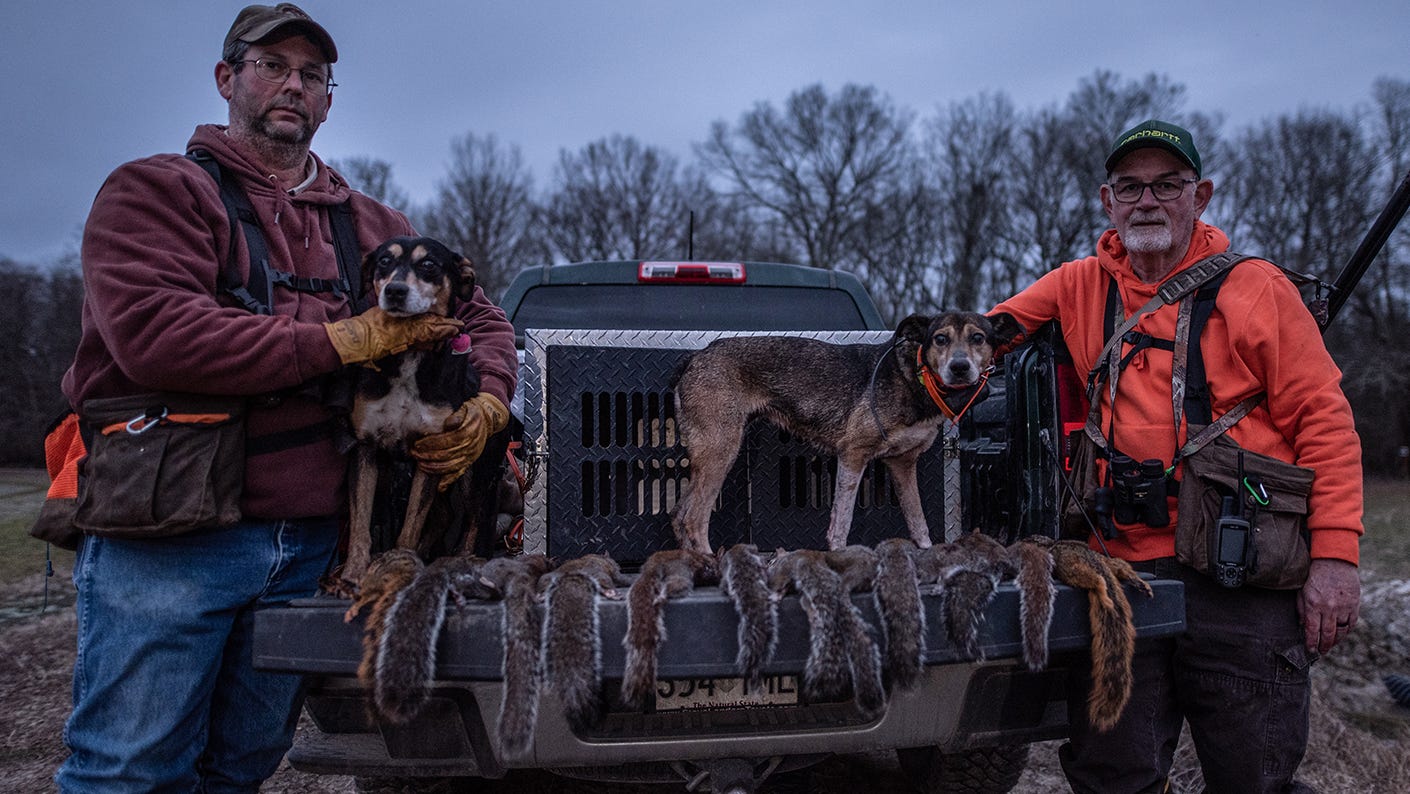 Fox squirrels, grey squirrels, and a couple of good hunting dogs make for a great hunt.


So how do we shoot them once they have spooked? For fox squirrels, the best technique is to split up and have someone walk a wide circle around the tree while the other person stays still waiting for a shot.

As for the far flightier grey squirrel, keep a shotgun on hand. A skilled shotgunner has a good chance of killing a grey squirrel as they bounce around low in the canopy. It's imperative for someone to keep an eye on a grey, or at least the last place they saw it as people shuffle around for a shot.

Feel free to play around with flavors and add things you like to the mix; this is by no means a hard and fast recipe (i.e. clove is a traditional carnitas aromatic that I don’t prefer, so I’ve left it out.) 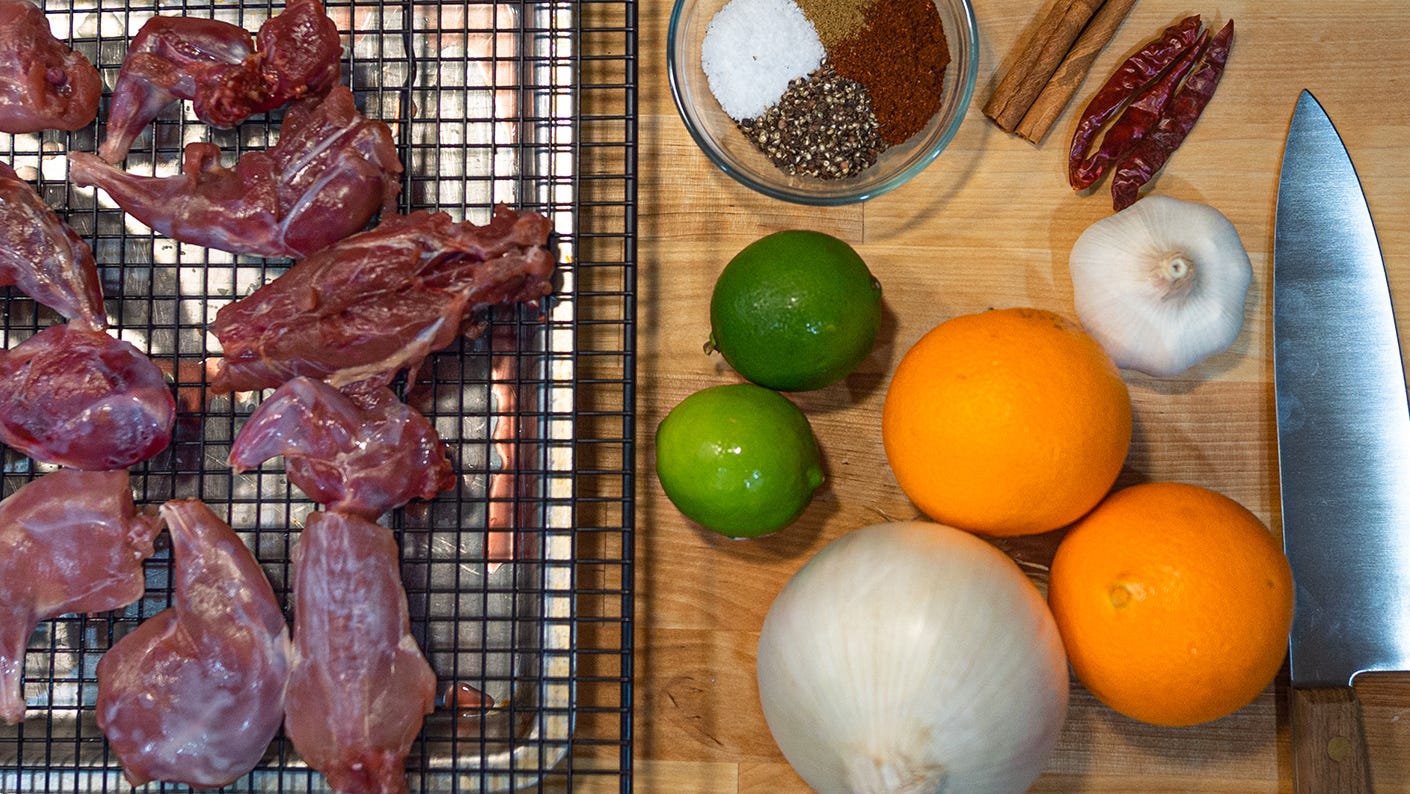 Super simple recipe, so don’t be afraid to modify it and have fun, that’s what cooking is about.

Start with your clean squirrel. We are going to put them on a wire rack and salt them allowing them a few hours in the refrigerator to let that salt soak in and any excess moisture to dry, this is not necessary but will help to get a good sear. 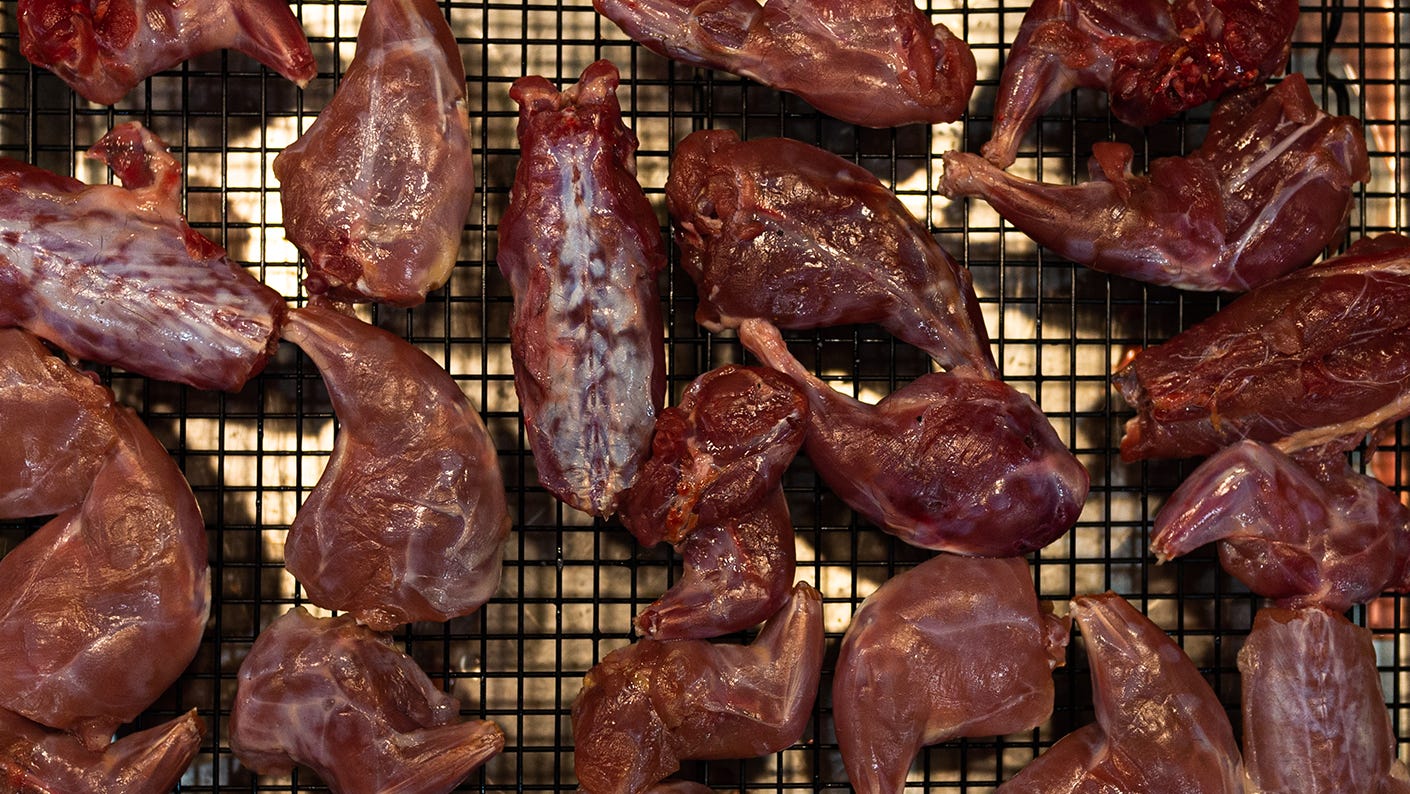 Pat the squirrel dry with a paper towel and brown in a hot skillet with a tablespoon or two of high-temp oil for about 45 seconds per side. We are not cooking the squirrel here, just adding some texture and depth of flavor. 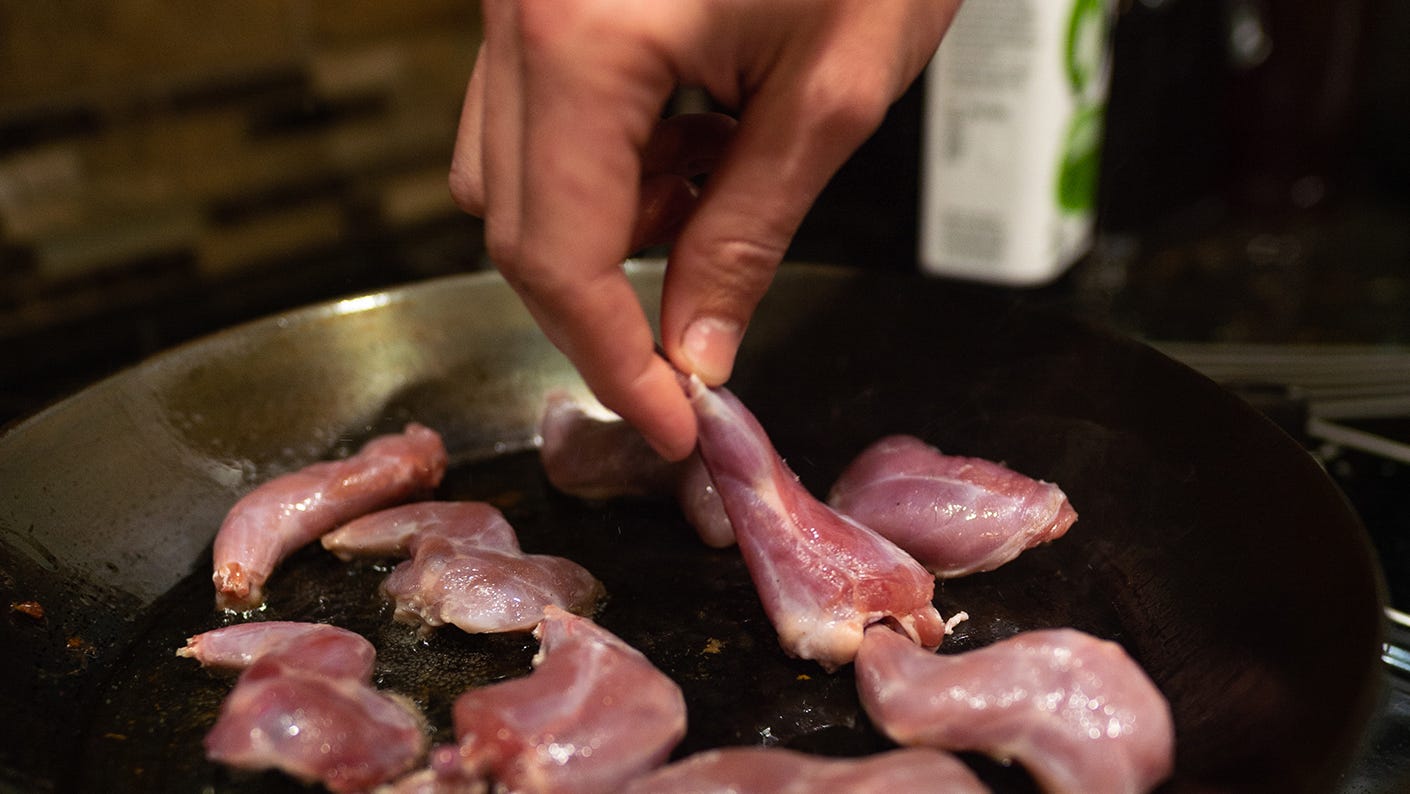 Once the meat is browned, put it in a crock pot with 1 cup of lard. You can substitute shortening, beer, or coca cola, but squirrel is very lean, so we prefer lard.)

Cut your oranges and limes in half along the equator, squeeze the juice into the crockpot and toss the rest of the fruit in too. This will add more citrus flavor and moisture allowing the flavors to circulate as it cooks.

Cut a large white onion into wedges, add to crock pot. Cut your head of garlic in half making sure to cut across the cloves and add to pot.

Add in your dry spices, salt, cinnamon, dried chilis, and anything else you want. Pour 1/2 cup or water or chicken stock over everything and cover. 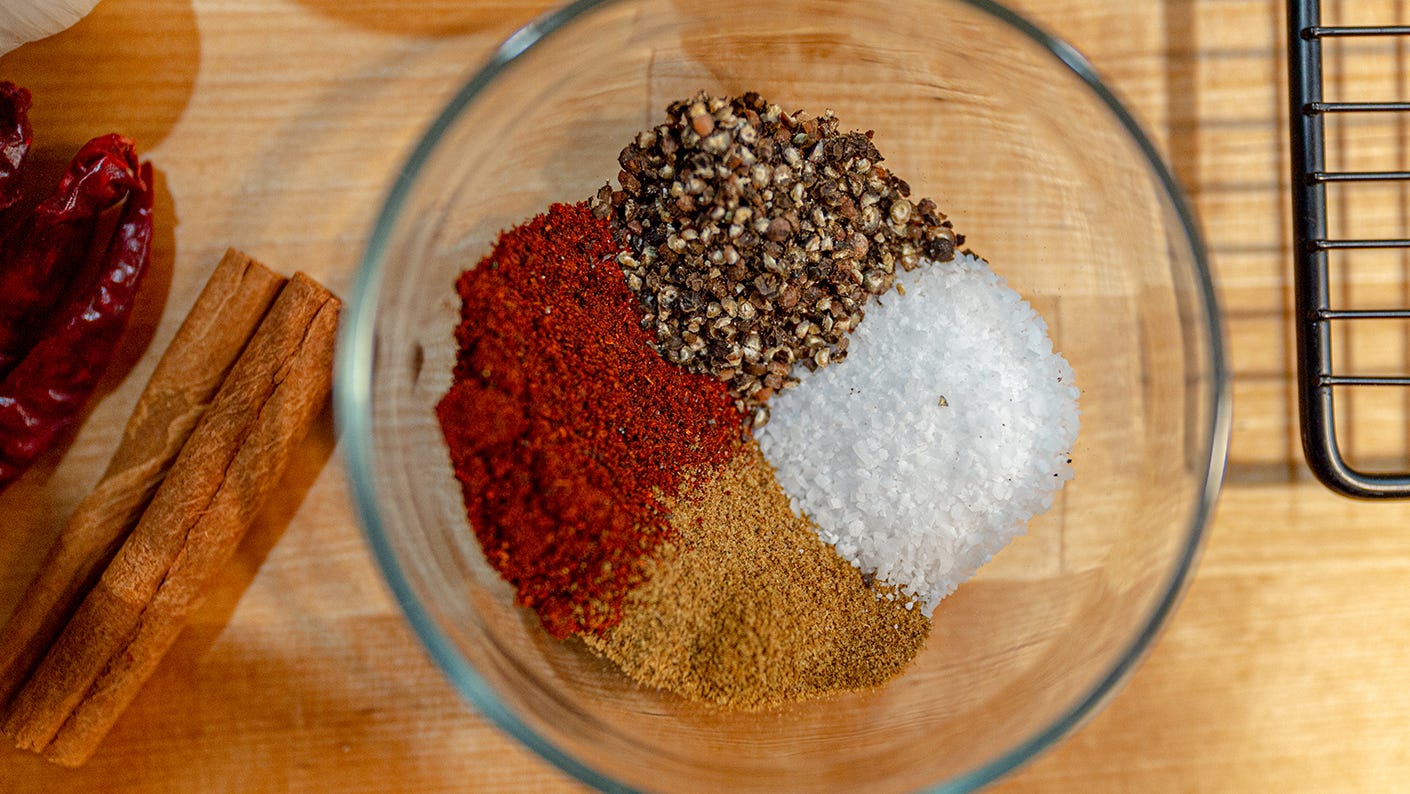 Allow this to cook 3.5-4 hours on high or until meat easily falls off of bone.

Note: this can also be cooked on low all day, or in a dutch oven if you prefer, just keep the temp low and check for tenderness.

Once the meat is tender remove from the crockpot onto a large plate or baking sheet. Using a fork scrape meat from the bone. The meat should easily release. Be very careful as squirrel bones are very small and unpleasant to chew. Also take special care of any bones that were busted up during the hunt.

Once the meat has been pulled from the bone, we are going to sear it. Feel free to take a taste of the meat now (should be sweet moist and aromatic like a rotisserie chicken) and add any salt or spices you feel are lacking.

Then in a hot carbon steel or cast-iron skillet sear the meat in batches until the edges are crispy (make sure not to overcrowd the pan) this should take a minute or so per batch. 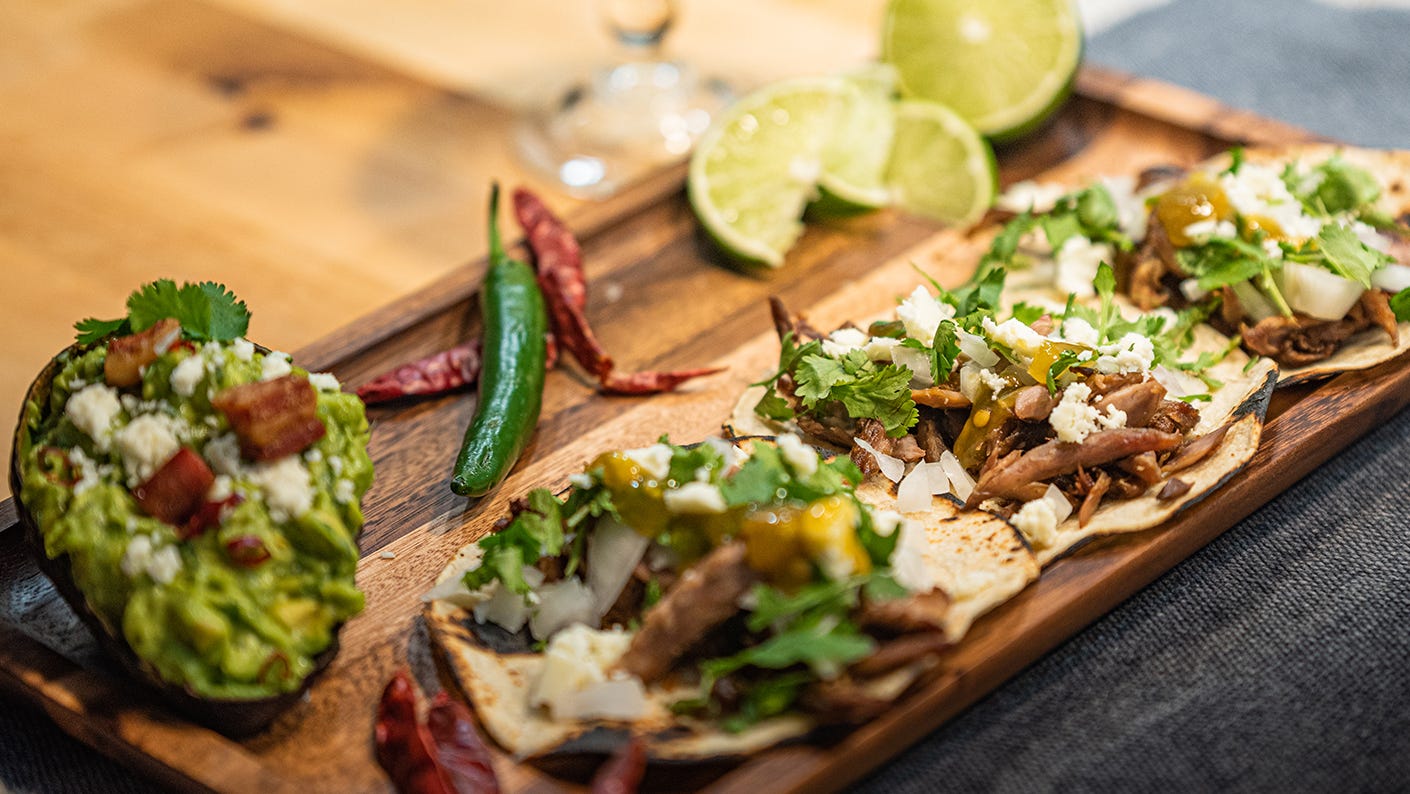 Add your tender, crispy, sweet and peppery squirrel to a warm tortilla of your choice, add some diced white onion, fresh chopped cilantro, and some salsa verde and enjoy!